Heya Folks
Things have been quiet here at Moldre HQ for a while
But that doesn’t mean that there aren’t things a-happening behind the curtain.
Whilst I’ve been trying to awaken the slumbering half of my brain that writes songs
(oh, and there are some new tunes that have made it into my notebook)
I’ve been busy coming up with the next clip in our series from An Ear To The Earth And this means that we only have one to go so that every track on the album has an accompanying clip
This time round my collaborator has been my favourite movie director
My 14 year old daughter Bronte
We worked together on a concept, created a storyboard and designed a costume
Filmed the clip on her iPad – with my banjo/slide players (Adam Lang) young son – William Lang
William certainly deserves an Oscar nod for his performance
Bronte then edited all the footage and assembled it as you see it below
I couldn’t be prouder of the result
So, here’s the new one O, Dreamtime Blues
The closing track from An Ear To The Earth

PS. A few months back I received a  message that from a French pastry chef and her staff about how much they enjoyed my new song Madeleine which they’d been playing on YouTube. In fact they said the song was tastier than their very own French Madeleine pastries – I was chuffed so I sent them a copy of the album. Their response has left me speechless.

A few weeks later I received a parcel which contained a bottle of French wine and a USB stick full of all their favourite French music. At the bottom of the box was a letter and a small wooden carving – which was actually a pen knife called on Opinel. Apparently its a French institution that French men and some women carry one for cutting bread or cheese (they receive one at a young age). This particular knife though was purchased from a French artist who will carve your likeness into the handle – he usually refuses to work from a photo but chef’s Severine and Charlotte went to visit him with Beef Bourguignon, Chocolate Cake and a bottle of wine to be sure that he would accept.

My daughter now thinks I’m famous. I’m enjoying that while it lasts. Incredible kindness from wonderful people that I’ve never met on the other side of the globe – it really knocked me off my feet. The Opinel also appears in the new clip! 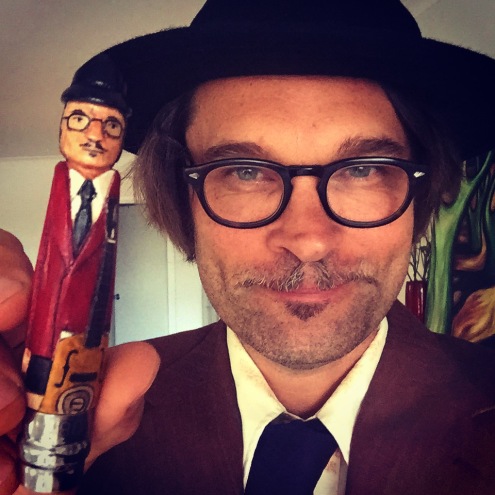