Well, after Mark’s Ballarat/Canberra/Melbourne jaunt he’ll be picking up his guitar again – this time to hit the NSW Southern Coast – with fellow Central Coast songstress (and close friend) Sarah Humphreys. They’ll be playing four back to back shows   – solo and acoustic – in Nowra, Shellharbour, Milton and Jamberoo. All the shows are free entry.  Just before they head off Mark will play a solo set on Wednesday Oct 2nd at A Walk In The Park – an event to raise awareness for mental health issues.

We’ve lifted another track from An Ear To The Earth and put it in the talented hands of artist Brett Curzon – this time Four Winds gets the film clip treatment. Vintage western archived footage married with apocalyptic lyrical imagery in waltz time. More clips to come. The long term goal remains to create a clip for every track on the album.

An Ear To The Earth continues to gain strong reviews. This time round we’ve received a couple from the other side of the globe. MOS EISLEY MUSIC in Germany calls the new album  “one of the best folk releases this year”. And AMERICANA UK  gives it a 7/10 whilst making comparisons to Tom Waits, Nick Cave and CW Stoneking and saying “….he delivers a wonderful noirish tango in ‘Madeleine’ which reeks of dank dark alleyways while ‘I Don’t Know What Becomes of Her’ hides a coiled up menace beneath a deceptively attractive Texican rhythm with the slow burning guitars hinting at the darkness Moldre is singing about.”

While we’ve got you reading – Mark had a chat with Jeff Jenkins for The Music (Melbourne) – you can read that chat here.  Jeff had this to say  “An Ear To The Earth is one of 2013’s tastiest trips, taking the listener on a rollicking, rootsy journey. One minute, it rumbles; the next, it’s gentle and poignant”

Finally, here’s a pic taken by Dave Hyland of Mark and the band at The Workers Club in Melbourne. Tour highlight:

Mark’s high school music teacher, Ms Hur, (who he hadn’t seen since high school) turning up at the Canberra show and letting everyone know that Mark is still a very naughty boy. 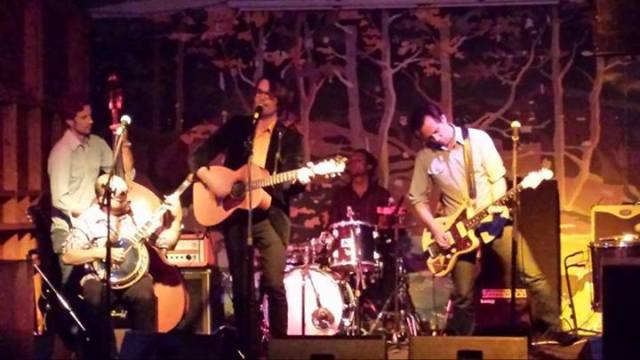