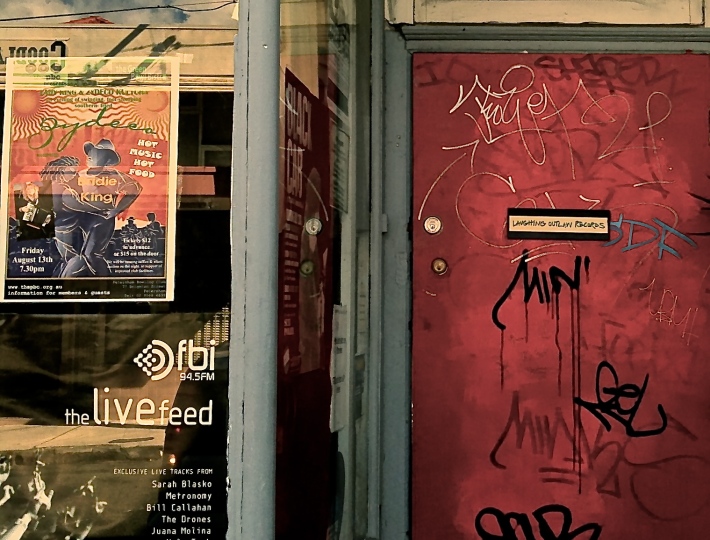 Well folks, once again I have found a musical home.

As most of you likely realise, sometimes we all feel the need sometimes to return back to the place where everything began. Somewhere that feels comfortable, where the smiles are reassuring and the smells are familiar. A place where you can put your feet up and not be scolded. A place where you’re surrounded by friends, encouraging banter and off in the kitchen there is always an open fire burning and a  pot of soup on the stove. The kind of home where you can stand around an old, out of tune upright piano ’til late at night and harmonise to Bing Crosby tunes with a glass of gin pressed in your hand. Where is that homely musical haven for me? I’m glad you asked.

As it turns out it’s the place where I started. Stuart Coupe at Laughing Outlaw Records was the first person to show some musical faith in me when he signed a pretty naive and wet behind the ears 4 piece band that I was involved in called Hitchcock’s Regret, way back somewhere in the vicinity of 1999-2000. We released a couple of albums on Laughing Outlaw and left after recording our 3rd (and last) – releasing endless_intermission on Spacejunk. A label run by our producer at the time, Tim Powles (drummer/producer for The Church).

Now, years later, here I stand (actually, here I sit)  ready to release solo album number 2 into the ether and find myself lingering at the very gates where the first  symphonious seed was planted. So it is with no further ado that I’d like to announce that my latest 10 track long player will be released on April 5th on Laughing Outlaw Records and Inertia distribution. Here’s hoping that you, dear reader, will join me for the ride. Loads more music/videos/details coming very soon…..